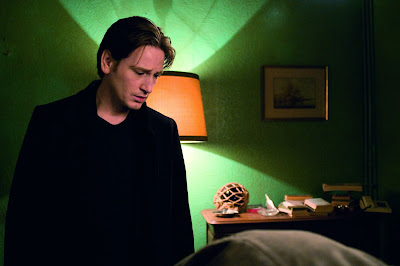 On the eve of a big promotion successful businessman Étienne Meunier (Magimel) runs into childhood friend Patrick Chambon (Demaison). They have coffee and later meet for drinks while discussing the past and their plans for the future.
Étienne lets out a sceret he's never told anyone. Things go downhill from there.
Without revealing too much about the plot, it's almost common cinematic sense that people do not run into people they haven't seen in years just because. Things never go well afterward!
We see as Étienne's life begins to unravel as blackmail, murder and strange dreams begin to take over his existence.
Most of the film relies on its ability to combine thriller qualities with character development but truth be told the entire thing comes out more as pastiche than genre flick.
For one the characters never seem to be entirely truthful. They're like Hitchcockian creations trapped in a selfconscious Lynchian experiment.
Étienne for example seems to know that everything he's doing will turn out for the worst but keeps on doing things that go beyond reason (Magimel does a terrific job playing an asshole we can still root for despite our best knowledge).
Patrick on the other side comes off looking as someone despicable and annoying, in a way the director tries to study our reaction towards class systems as we come to dislike this man perhaps because unlike Étienne he never moved forward in life.
He's become a parasite of sorts who then tries to drag the successful Étienne down with him. Demaison's performance has shades of the creepy work Matt Damon provided in The Talented Mr. Ripley (in a key scene we even listen to Vivaldi's Stabat Mater which was used to great effect in Ripley). Yet we are forced to wonder what exactly defines success in these terms if not the American dream?
This notion becomes even more twisted when Étienne becomes paranoid about an American taking over his company and his job (the end of this subplot is hilarious).
Now and then Vigneron comes up with little quirks that make this movie shine but more often than not he lets the absurd conventions of it all push it towards the utterly preposterous.
Traceless might not always know what it's doing but when it does it well it makes us believe it might reach Crimes and Misdemeanors proportions.
Posted by Unknown at 10:43 PM