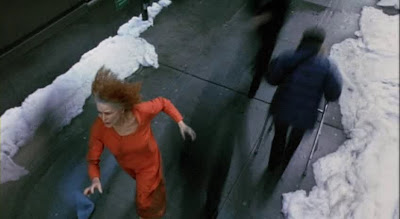 I have to confess that before writing this post I had never been able to make it through an entire viewing of Requiem for a Dream, not because I found it too bleak or gruesome or whatever (Lars von Trier and Michael Haneke are two of my favorite filmmakers...) but because I always felt it was entirely over hyped and to be honest not that good a movie.
Things haven't really changed in the nine years that have gone by after my first attempt to watch it, so don't think this will include a change of heart.
In fact I never got what the buzz about Darren Aronofsky was all about until I saw The Wrestler...but that's another story.

Given that I had to choose my favorite shot of the movie this time I had to look at it with a more critical eye and in doing so I realized that the thing that has always bothered me about this movie was how obvious everything is.
It's nothing but a morbid look at drugs disguised as a cautionary tale, Aronofsky's direction in fact is almost reactionary in the way he condemns and judges all his characters.
This was never more obvious to me than in the film's opening scene where we see Sara Goldfarb (Ellen Burstyn) lock herself in a closet when her son Harry (Jared Leto) arrives at her house.
At first we have no idea what's going on and assume he will beat her up. 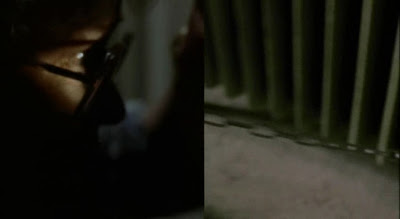 She looks through the keyhole terrified as Harry bangs and throws a tantrum. Then we see what he's after; he's trying to pawn his mother's precious television set once again.
He's done it so many times before that she has chained it to the heater.
In this precise shot where through split screen we see the terrified woman looking at her son's behavior and his attempt to steal the chained TV, we have the essence of the entire movie.
Notice how beyond Sara and Harry there's someone else in the shot: the person looking at Sara.
In this case the camera serves as Aronofsky's eye as he lets us know that the movie to follow will be his look at how people who succumb to drugs are chained to addiction.
The use of the word "chained" is by no means a pun, given that Aronofsky's visual language, and well, the chain tied to the TV, make it clear what he's referring to.
Throughout the whole Requiem for a Dream we are reminded by the director of how monstrous this people can be, he wears his sensibility on his camera and the movie suffers greatly because of it. 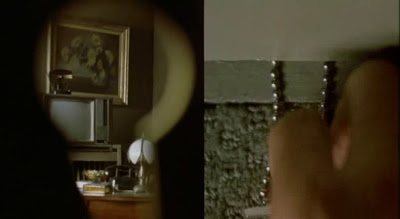 A following sequence of shots proves Aronofsky's judgment (or perhaps a slight attempt at some sense of humor) when we see Sara give Harry the keys to the TV lock.
She carries it in a chain (another one...) around her neck and when she gives it to Harry, for a minute we have the impression she's handing something sacred.
It's no coincidence that for a second the shiny balls of the chain remind us of rosary beads. 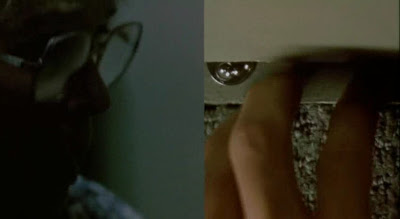 After all, addiction, is their religion.


This post is part of the Hit Me With Your Best Shot series, hosted by the fabulous and quite addictive, Nat of The Film Experience.
Posted by Unknown at 10:13 PM

My favourite filmmakers are Sidnet Lumet and Michael Haneke. We're half twins!

Also, it took ten years for me to actually site down and watch this movie. Too heartbreaking.

Nice writeup, but I have to say regarding your opening it's like you're inside my head. I've never been able to fully appreciate this or Aronofsky.

okinawa: sorta except that I said Haneke was among my faves, not on my top 2 :)

Andrew: thanks!
Well I hate "The Fountain" for example and think "Pi" would've worked better if it was an hour shorter. "The Wrestler" I love though.

Oddly I've never been put off by the brutalism of Aronofsky's message in Requiem - I believe I may be one of the few people that watch it time and time again (I especially enjoy watching it with people who haven't seen it before).

Aronofsky simply doesn't pull away from the horror at any point daring you as a viewer to watch on. It's this arresting visual work and heady symbolism that is making me so enthusiastic about seeing Balck Swan. Just imagine what he can do with a real horror story.