"The bigger I get, the smaller you make me feel." 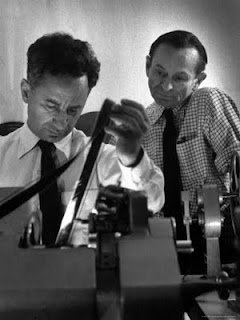 Elia Kazan is one of my three favorite directors. He never defined a trademark, yet watching his films you kinda know he was the man behind them.
Perhaps the way in which he aimed for a crude realism (without approaching documentary-like filmmaking) that still got the best out of method acting or maybe the way in which he always made black and white seem like the way life actually is.
The one thing I know is that not two of his movies are the same, which is why I wasn't too surprised watching A Face in the Crowd for the first time.

Not only is it an example of the remarkable work Kazan got out of his actors but also proves what might've been his only trademark of sorts: his interest in touching the subjects no one else would. He went from satirizing fetish in Baby Doll, condemning antisemitism in Gentleman's Agreement and creating one of the most disturbing psycho-sexual tragedies in A Streetcar named Desire. His works were usually condemned by conservatives which is why A Face in the Crowd probably seemed innocuous back in the day considering the things he'd done before. Today however, the film works as a scary parable for what the media can do.

My favorite shot in the film is a meta moment that encompasses three different levels addressed near the film's climax. 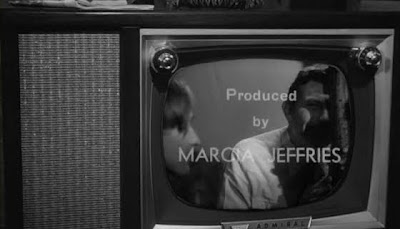 First we have the obvious, when for the first time we see Lonesome Rhodes (Andy Griffith) as who he really is.
We hear who he really is when his producer decides it's time to unmask the man who went from simpleton to monster. She opens an audio channel while the TV show credits run so that we can learn what the man in the television set thinks about us.
The catch here is that the we, isn't the film's audience but the TV audience within the movie. All throughout A Face in the Crowd, we have been granted with backstage passes to see what goes on in these people's private lives.
In a way we have worked as accomplices by going along with Lonesome's game.

This realization takes us to the next level of interpretation for we can't help but wonder (and I'm sure Kazan did it intentionally) what the filmmakers were thinking about the people watching the movie in the theater. After all A Face in the Crowd might be no different than any of Lonesome's media products.
It's made by an entertainer, it has a purpose and there's more going behind closed doors than we could even imagine.
Elia Kazan wanted people to question the media. To question what they were watching and hell, to even question a movie that questioned those very things.

Last but not least we have the "produced by Marcia Jeffries" title card which seems to go by innocently but contains a tragedy of almost Greek proportions to it.
In that moment, Marcia (a wonderful Patricia Neal), is finally aware that in order to destroy Lonesome she must also destroy herself.
The look on Neal's expressive eyes is heartbreaking and terrifying, she's a combination of Dr. Frankenstein realizing she created a monster and a mythological deity (think Prometheus) coming to terms with the sad notion that she might've given too much to someone who deserved so little.
Was Kazan suggesting we weren't ready to handle the media? Makes one wonder what he would have to say about the relentless advancements in current technology.
This also makes us wonder if all people behind the media are as considerate as Marcia, the obvious answer would be no but we are left questioning the ethical implications that come with creating media products and therefore once again are driven to the idea of gods as ultimate creators.

Watching most of Kazan's films one gets the feeling that nothing really special is going on but this shot proves that if you take a closer look, they reveal unimaginable and unexpected depths.


As a bonus, and since I didn't get to do Bring It On with everyone else last week, here's the virginal Lee Remick (she was 22 and making her film debut!) giving Kirsten Dunst a run for her money in the cheering profession. 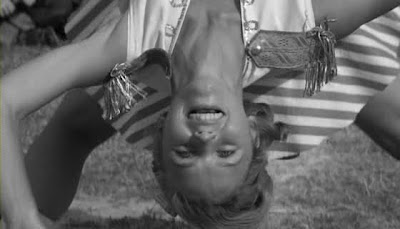 This post is part of the The Film Experience's Hit Me With Your Best Shot series.
Posted by Unknown at 7:00 PM

what a lovely article. very insightful -- especially with the "produced by Marcia Jeffries which i didn't even notice.

i'm still stunned several days later at how carnal this movie is. including the "virginal" Remick.

I remember seeing this film years ago. I do not remember much about it aside from feeling creepy and never being able to watch Matlock the same way.

Michael, I have never seen Matlock so I really had no Griffith memories to shatter hehehe.

Still never seen this and I am generally very much a Kazan fan.

Great article, Jose. Of the pre-70s directors it's Kazan, Lean and Cukor for me...and Kazan wins for consistency. It sucks that he's never given the credit he deserves. I'm yet to see this one, but it sounds like one well worth the time.