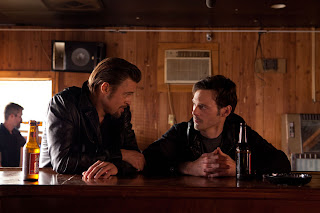 Last time writer/director Andrew Dominik and Brad Pitt worked together they created a searing portrait about the perils of fame for fame's sake in The Assassination of Jesse James by the Coward Robert Ford. The movie's elegiac tone glorified a past that had allowed violence to become romantic - something the Western genre seems keen on perpetuating - which is why it feels almost shocking to see how unromantic Killing Them Softly is from the get go.

The film opens with a stunning sequence in which the camera follows Frankie (McNairy) as he walks through what seems to be a storm of waste. The scene is inter-cut with fragments of a vintage speech given by then Senator Barack Obama, and the sound seems distorted at times. Immediately Dominik reveals to us when the movie's set and how it'll be a vision of the chaos in America as interpreted by the violent clash of sounds and images he bombards us with.

Frankie then meets his friend Russell (Mendelsohn) and the two attend a job interview of sorts where they agree to rob a Mob protected card game. Things of course don't work out too well for them and soon they have not one, but three exterminating angels trying to hunt them, the most notorious of all being the suave Jackie (Pitt), a middleman between criminals and their debtors sent to restore balance in the fragile underworld.

The film's biggest purpose seems to be drawing parallels between the crime world and politics which tend to be seen as "legal crimes". This is a movie about people with unconventional jobs trying to make a living for themselves. The tone is dark, but the dialogues can be hilarious, leading to a series of confused chuckles; can we really laugh about these matters? The film's most stunning sequence features a brutal beating under the rain, in which the rites of violence seem both messy and beautiful. When in a latter scene, DP Greg Fraser recurs to slow motion we find ourselves in the presence of a film where we are supposed to see the aesthetic values of cruelty, reminiscent perhaps of how sometimes we're fascinated by how a wild predator devours its prey.

Killing Them Softly is by no means a perfect movie and the director gives his audience little chance to digest the movie on their own terms. We are constantly shown political videos that seem out of place, given that the movie could've spoken as an allegory without drawing such obvious parallels. For its harsh view of America, as the country once again seems to be entering a hope and change renaissance, the movie will prove to be quite difficult to sit through, its pessimism perhaps only "rescued" by its brilliant cinematic values.
Posted by Unknown at 8:31 PM 2 comments:

Head Over to PopMatters... 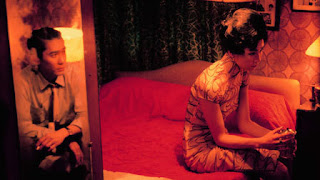 ...and read my review for In the Mood for Love.
Posted by Unknown at 5:51 PM No comments:

The Hiatus is Over...

After what have been two very hectic months I've been neglecting this blog like there's no tomorrow. However I just remembered my domain is turning 9 this year and what better way to celebrate him than by actually posting in him? So, without further ado, here's an interview I did with Cheyenne Jackson over at PopMatters. 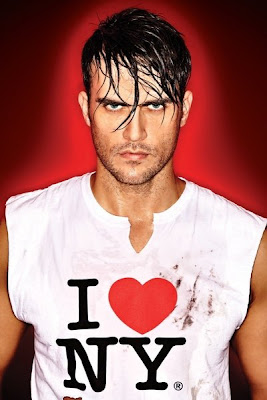 If his clever responses aren't enough, then distract yourself with his beautiful face and biceps. Also, the shirt he's wearing epitomizes what's been of my life recently...but more about that later. What have y'all been up to during my absence?