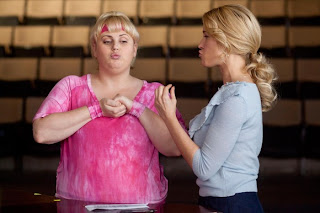 Movies about young people are often petty, predictable, condescending or a combination of them all, which is why it's always a real pleasure to find one that defies expectations and the limits of age group. You know the kind...Sixteen Candles, Mean Girls, Bring It On, Easy A, Clueless. On paper, Pitch Perfect had all the makings of a bomb: a movie about a group of female a capella singers who recruit the new tough girl, who then proceeds to show them how it's done while discovering she too has a heart.

The group in question are the Barden Bellas led by prim control freak Aubrey (Camp) who favors Ace of Base and flight attendant uniforms and the tough girl is freshman student Beca (Kendrick), an amateur DJ who only joins the group to show her dad she has some social skills. After a shameful event last time they went to regionals, the Bellas are hard at work trying to regain their old glory and start taking on "unconventional" members; besides Beca, they make room for soft spoken Lilly (Lee), seductive Stacie (Knapp) and the full figured Fat Amy (a scene stealing Wilson).

Throughout the movie it's pretty obvious where things are headed for, but there is not a single second here that doesn't feel fresh and original. Director Moore works Kay Cannon's screenplay (based on a book by Mickey Rapkin) in a way that we get to know the characters well enough without recurring to overdone expositions or cliché (Banks and Higgins are phenomenal in short parts). There is a scene where the Bellas decide to have a heart to heart that's underplayed in all the right ways. There are lines and dialogues that you know you will be quoting for years to come and even the musical selection is rather supreme (hits from Madonna to Kelly Clarkson make key appearances). The cast is excellent; all the actors create an enviable synergy that works because, just as in the plot, it takes the best from people who couldn't be more different if they tried.

The best part about Pitch Perfect is realizing its pleasures aren't merely Glee Stockholm Syndrome, but that through heart and wit it injects new life into something trite and overdone. The film truly has nothing new to say and it doesn't reinvent any art forms, however it does what it does so well, that just like the pop songs it pays homage to, it gets under your skin and there will be nothing you can do to help yourself from moving to its beat.
Posted by Unknown at 1:29 AM 1 comment:

Trouble with the Curve *** 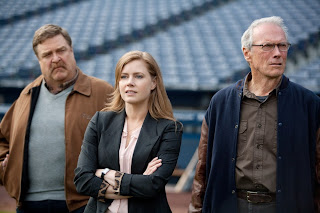 Clint Eastwood is an American institution. Like all institutions, his importance seems to be inexplicable to some and unquestionable to others. Trouble with the Curve is the first movie in almost twenty years where he hasn't directed himself and his first starring role since what everyone thought would be his swan song, yet these facts will most likely be overlooked in light of the icon's recent "coming out" as a true political conservative. Therefore the film will most likely be examined, digested and analyzed as a representation of this "new" phase in Clint's career: the one where he came back to bite Hollywood in the ass. Impartial and objective as we may try to be, we are only human after all.

As humans, we might find ourselves rolling our eyes when veteran baseball scout Gus (played by Eastwood) grunts, mumbles and growls at every sign of modernity, delicateness or attempts by his daughter Mickey (Adams) to reach out to his "human" side. We might also find it preposterous to realize that Gus is nothing but a perpetuation of the Clint persona: a brutish cowboy from a long gone era who in the end has a real heart. Yet, despite the undeniable reactionary nature of this movie (essentially an antithesis to last year's Moneyball in how it defies the idea that computers are better at baseball than humans) there is something utterly charming and even pleasurable about how the movie shapes itself like old fashioned entertainment.

Unlike most recent movies that take place in the world of sports, this one realizes that not everyone will identify with balls and bats, so it allows its characters to take over and win the audience's love. Eastwood might be doing his usual shtick, but few actors are as selfless when they play a caricature like Clint is. Adams is of course enchanting as usual; watching her play off against Clint is a delight, particularly because he had the potential to eat her up onscreen. Rounding up the cast is Goodman in a best friend/jolly man role, Lillard as a douchy scout trying to steal Clint's throne and Timberlake as Adams' love interest.

The movie seems devoted to making us realize that nothing is as good as old fashioned American values, yet even within its delusion (there's a subplot about immigration that is both uplifting and offensive) it remains completely true to itself, to the point where we can't help but enjoy ourselves and embrace it despite our best knowledge. Almost everyone with half a brain will leave the theater thinking Eastwood is so reactionary he's scary, but the same people will probably want to have a beer with him and listen to his stories...and that's the trouble with institutions.
Posted by Unknown at 12:36 AM No comments: 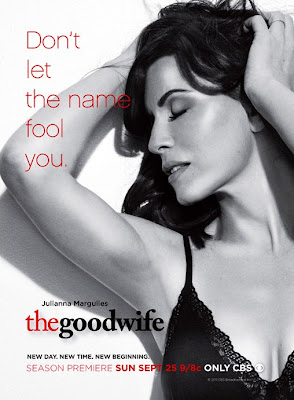 Head over to PopMatters and read my review of The Good Wife, Season Three. Are y'all watching this show? If not, get ion it!
Posted by Unknown at 7:44 AM No comments: