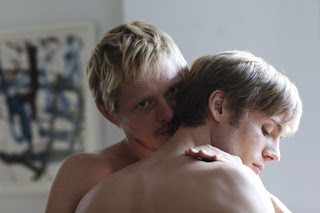 Writer/director Ira Sachs has expressed how his newest movie Keep the Lights On is a completely autobiographical take of his relationship with literary agent Bill Clegg; yet even without knowing about the real life details, the movie’s lived in specificity would’ve still made viewers think they were witnessing an unadulterated form of artistic confession.

Shot in yellowish hues by Thimios Bakatakis, the film opens during a late New York City night that seems extracted from a 1970’s dream. It’s 1997 and we see Erik Rothman (Lindhart) trying to hook up over an anonymous telephone hotline; he describes himself, his tastes and reveals his location in hopes of someone who will be able to host. After several attempts he finally finds someone who isn’t flaky. He reaches Paul’s (Booth) apartment where after a mere glance they proceed to engage in passionate intercourse. Before Erik leaves, Paul tells him not to get his hopes up, he has a girlfriend.

In almost any other kind of movie, this would’ve been the first turn of the screw: will the charming Erik be able to conquer young Paul’s heart despite his not being out of the closet? In this film however, we are presented with something much more fascinating as it shatters our need for a traditional structure. The next time we see Paul and Erik they are together. We don’t know what happened to the girlfriend, we don’t know if/how Pault dealt with his situation, all we know is that they’re a couple and that Paul likes doing crystal meth when they have sex.

Keep the Lights On isn’t a “story” as much as it is a mosaic of a relationship. We follow these two characters for over a decade and we see them struggle with work, interpersonal issues and addiction. Sachs doesn’t linger much on specific problems as he does on more general arcs, the most prominent of all perhaps being Paul’s drug addiction. However to mention the film as a movie about drugs would be to disregard Sach’s artistry and his ability to study and develop characters without reducing them or us to easily digestible stereotypes.

We are not supposed to know everything that happens to these people, after all in real life how often can we say we get to know every little thing about someone else? And perhaps this is the movie’s point. In the end Sachs isn’t as interested in sharing his story with the world as he is in dissecting the essence of a love affair. What are the things we keep once they’re over? How do these events play in our heads when we revisit them?

Sach’s cleverly makes Erik a foreign documentary filmmaker. Cleverly, because in his relationship, Erik is an adventurer trying to conquer uncharted territory but refusing to drop his expedition. Throughout the film Erik is working on a movie about gay artist Avery Woods (who you have a desire to Google from the instant he’s mentioned) and we see how Sachs tries to use art both as a demon and an exorcist. It’s hinted on many occasions that Erik’s work often pushes him away from Paul, yet the director asks us: how would I be able to deal with this if it weren’t with my art?

It helps that Erik is played with such sense of wonder by the extraordinary Lindhart, who combines a stunning physical presence with a surprising childlike behavior. He breaks our hearts as we realize that his love for Paul is perhaps just as dangerous an addiction, yet he remains so human throughout, that when one of his friends confronts him, we can’t help but relish in his weakness. Erik, more than Paul even, is a character we want to know in real life and Lindhart’s beautiful performance makes us believe we just might after leaving the theater.
Posted by Unknown at 6:28 PM 2 comments: