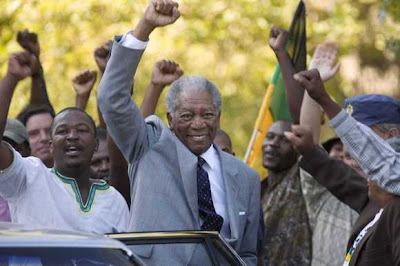 The reason to revisit history is usually to learn something from it or to examine it with a critical eye. Clint Eastwood's reason in "Invictus" is merely to recreate and reduce it to a simplistic, almost fablesque succession of events featuring important people.
The film centers on Nelson Mandela's (Freeman) attempt to end post apartheid tensions by uniting South Africa through its rugby team, the Springboks, and most specifically by crowning them champions of the 1995 World Cup.
When the film begins Mandela has just been released from prison and wins the presidential election. He takes over a country still divided by racial differences and asks Springboks captain Francois Pienaar (Damon) to win the championship.
Apparently all it took for the team to succeed was Mandela's request because then they go on a winning streak as they become loved by both white and black audiences.
Eastwood doesn't care in exploring the use of sports as a way for political manipulation; were the Springboks cause or consequence of the divisions? And if so how did they exactly make people who had hated them, represent their country?
The film has no regards for subtleties and the main arc is exemplified in the fact that when the movie begins black and white people play different sports divided by a road and when the film ends they're hugging each other and cheering.
If Eastwood doesn't care for historical complexities he does a much worse job encompassing what the people represented.
Mandela as played by Freeman is a copy of what the political figure seems to be on television, but he lacks the depth to become a credible human figure.
The Mandela in "Invictus" is a fictional creation that exists only for the purpose of delivering a unifying message to help the plot move forward.
Eastwood makes him a combination of a saint and Yoda who delivers grandiose lines like "forgiveness liberates the soul" in the most awkward situations.
There's also an element of extreme fantasy as Eastwood expects us to see Mandela leaving a government meeting to hear match results as something inspiring and not irresponsible.
History made sure that Mandela's tactics aren't disputed, but the film lacks dramatic responsibility because we never really expect the result to eb anything other than victory. Not only because Eastwood trivializes and patronizes history, but because we can't fathom Mandela as someone who would leave the entire fate of his country on a rugby match.
For him to become one of the most important figures of the twentieth century he at least had to have a plan B right?
Posted by Unknown at 5:45 PM

Pretty scathing review. I was going to wait for the DVD anyway but I sort of expected more from Clint Eastwood.