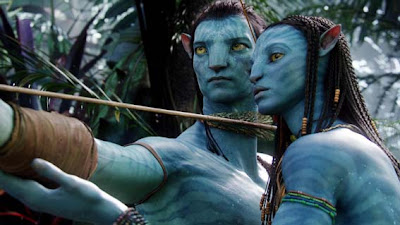 There's a fascinating paradox at the center of "Avatar". On one side we have an open critique to how big corporations treat the environment, colonialist invasions and the destruction of ancient cultures but on the other side the movie itself is a product of an industry that has endorsed those very things throughout its existence.
Yes, movies made within a system can be critical and question said surroundings, but "Avatar"'s sense of self grandiosity makes its message sound almost ironic.
With lesser movies-in terms of audience expectation and several years of hype-there's always the benefit that comes with novelty, but "Avatar" has been surrounded by "most expensive movie ever" stories and there are few people in the world who don't know that James Cameron made the most popular movie of all time before this one.
Fortunately for Cameron, few will find the time or energy to finds flaws in his newest epic. The man sure knows how to tell a story and with "Avatar" he once again proves he's also the best at taking us right into the narrative.
Set somewhere in the future the film tells the story of Jake Sully (a wonderful Worthington), a paraplegic marine deployed to planet Pandora on a special mission.
He has to become a link between humans and locals called Na'vi-blue feline like humanoids with slender bodies and tails-who are against the invasion of their planet.
The human colony is in search of a powerful fuel called "unobtanium" for which they have to destroy forests and mountains so they plan to achieve diplomatic success by using half-Na'vi, half human creations named avatars which are accessed by putting the chosen human in a technological trance and uploading their consciousness onto the avatar which they can control during said "sleep".
Blinded by the possibility of having a movable pair of legs, Jake takes on the mission unprepared for the ethical dilemmas that will come from it.
He enters the Na'vi community where he's reluctantly taken in by Neytiri (Saldana), the leader's daughter, who's chosen to train him in their ways.
Before long Sully is working for three teams. There's the human scientists fascinated by the biological richness of Pandora who are led by Dr. Grace Augustine (played by Weaver, Cameron's sci-fi muse by excellence).
There's also the military team led by Colonel Miles Quaritch (Lang) who care little about the Na'vi as long as they can complete their mission and the Na'vi themselves who begin to take Jake as if he was one of their own.
Cameron lacks profound writing abilities (seriously the word "unobtanium" itself spoils the whole thing) and his story takes all the expected routes as Jae falls for Neytiri and has to decide if he will remain loyal to his army or his newfound beliefs. The movie most often feels like a CGI adaptation of Disney's "Pocahontas" as the Neytiri represent Native Americans (James Horner's score doesn't help dispel this notion as he recurs to tribal instruments and motifs that recall "Titanic"'s intense romance) and humans are the British in this case.
And the plot is plagued with inconsistencies we're supposed to take for granted like Weaver's strong willed character being shocked by the discovery that the soldiers are willing to kill the Na'vi in order to take over their land.
But Cameron is a sly player and what he lacks in writing genius he more than makes up in visual grandeur and with "Avatar" he doesn't just make us feel like his visuals are distracting us from plot holes and cliché, he pulls off something greater: convincing us that these things shouldn't
even play part of our viewing.
The director makes a deal with us: if we wanna take in his mastery of technological craft, we have to give up his inefficiency at achieving character depth.
He mostly gets away with it because "Avatar" is just magnificent to behold. Cameron's CGI innovations virtually create a photorealistic planet where every little thing is a world unto its own.
Scenes set in Pandora's jungles are like alien editions of National Geographic documentaries, with every plant and animal something exotic and beautiful to behold. Cameron has a ball showing off his creations and relies on huge "Out of Africa"-like vistas to make us try to understand the scope of this planet.
It helps that the Na'vi are nature lovers because this gives him the chance to concentrate on every little organism of the place. He's also spectacular with action scenes because unlike other directors he let's us see what's going on.
This makes sense given the hard work the effect team put behind a movie that's mostly made of computer images, Cameron evokes the magic that made our jaws fall to the floor as children and when one of the characters says "you're not in Kansas anymore" he's not only paying tribute to the wizard, he's also reminding us the long way we've come from 1939.
It's just sad that because of his story this comes with the tragic realization that if Pandora was real, we would already be destroying it.
Posted by Unknown at 6:13 PM

I also just saw Avatar and agree with your assessment that the movie is spectacular to look at but is a bit lacking in the story-telling aspect. The movie was reported to cost $237 million which is not the most expensive ever so don't believe all the hype lol

I also wrote a review so check it out!

yes me also agree with you all.i watched this movie ...Movie is wonderful...Fabulous...If anyone wants avatar movie watch online then just go through this link....

Cannot wait to see this. When are you seeing 'Precious'?

Very soon Michael! You should go see "Avatar" in 3D by the way.

Definitely agreed. I just saw it with my fiance and we were pretty blown away by the effects (in the 3D version, that is). And I suppose the complaint about character depth is somewhat true, but the story was more about the experience that we were seeing than it was about the characters' respective pasts.

Agreed. I have seen this movie with my friends and we all simply loved it. The story was awesome, the character was impressive, animation are terrific.