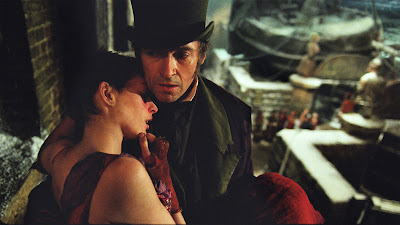 Based on the eponymous musical by Alain Boublil and Claude-Michel Schönberg (itself an adaptation of the famous novel by Victor Hugo) Les Misérables is a story about revenge, injustice and doomed love...or at least that's what one gathers it's supposed to be about, considering how bloated and lacking in feeling this adaptation is. The film opens with an impressive shot as the camera rises from under the ocean and we watch a group of prisoners raise a ship in the galleys. Among them is Jean Valjean (Jackman), a man about to be released who has been in prison for two decades for stealing a loaf of bread. Keeping a close eye on Valjean is inspector Javert (Crowe) who reminds him he must respect his parole. Immediately a dynamic of abuser and abused is established and we know that Javert will make Valjean's life a living hell.

Yet the problem is that we know this only by default. Les Misérables is one of the most celebrated works of literature in history and people from all ages have come to know it even if they're not fully aware of it (The Fugitive anyone?) but director Tom Hooper depends so much on the audience's knowledge of the novel/musical that he pretty much forgets to make a "movie" to go with the story. Before we know it, we're back with a clean shaven Valjean who has changed his name and become mayor of a small town (how? Why? We never know). His peaceful existence is suddenly threatened when Javert is appointed as guard in his town. This Roadrunner/Coyote dynamic goes on during the rest of the film as life keeps putting Javert in the reformed Valjean's way even when he's trying to do nothing but good. Among his greatest deeds is the adoption of Cosette, the daughter of doomed grisette Fantine (Hathaway), perhaps the most miserable of them all, who dies after selling her hair, contracting an unnamed disease (*cough* TB *cough*) and killing it with a rendition of "I Dreamed a Dream".

The plot spans over two decades and clumsily tries to fit a ridiculous amount of uninteresting events into its overtly melodramatic structure, yet the problem isn't how over the top everything is but how inefficiently Hooper puts it on film. The film is supposed to be grand, sweeping, majestic etc. but the myriad of topics covered in Victor Hugo's historical fiction simply slip through Hooper's fingers. Les Misérables is an epic and simply put, Tom Hooper is no David Lean. He makes it seem as if the historical context exists exclusively in the service of the romantic plots and the Valjean/Javert dynamic. Things just happen and we never truly understand why. But he also fails in giving all these characters a true emotional background. They too, exist there only to serve the director's vision.

Hooper and DP Danny Cohen shoot every scene as if it was being viewed through a smartphone picture application, creating distasteful compositions that contribute nothing more than "style" to a movie that should've been ruled by substance. If the songs weren't loud and dramatic enough, Hooper's camera zooms so close to the actors' faces that it seems he's trying to make a statement about their tonsils. His stylistic choices (why try to develop an auteur vision if it's so inefficient?) often take you out of the movie and you begin to question everything that surrounds it. Why don't characters seem to age if it's been 20 years? Why are Sacha Baron Cohen and Helena Bonham Carter still playing their Sweeney Todd characters? Why does Éponine seem to have been written to be the heroine in a telenovela? Why isn't Russell Crowe's fantastic Javert (the only character who seems to have a moral ambiguity) featured in more scenes where he's not being reduced to a sneering villain?

Les Misérables is sure to make viewers just as miserable as its characters, unless they're willing to pretend the movie's over after "I Dreamed a Dream". During the key sequence Hathaway is shot like Falconetti and she does so much with her face and your emotions, that her work should be considered nothing if not truly miraculous.
Posted by Notas Sobre Creación Cultural e Imaginarios Sociales at 9:40 PM

totally agree about javert. they made some really interesting (read: odd) decisions with this adaptation. same thing with the thenardiers. i loved eponine in it, though her role was brief. and, like you mentioned, the eidting was wonky and made time indiscriminate, which was a major flaw for this sweeping story.