The Wicked Witch of the North (Shore). 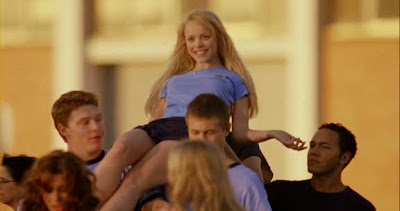 Few films capture the horrors of being a teenager in the way Mean Girls does. This first-class satire directed by Mark Waters and written by, Academy Award nomination-robbed, Tina Fey (adapted from a book by Rosalind Wiseman) is a hilarious (in a laugh to keep from crying sort of way) that deals with the lives of a group of teenagers and their interaction with "the plastics": the popular girls everyone hates and loves.
The Queen of them all is Regina George (Rachel McAdams) a girl so hateful that when we first meet here we learn that "evil takes a human form in Regina George."
This gives path to my favorite shot in the film.
Highlighted by Missy Elliot's addictive "Pass That Dutch" we see a blond queen being carried by her faithful slaves. 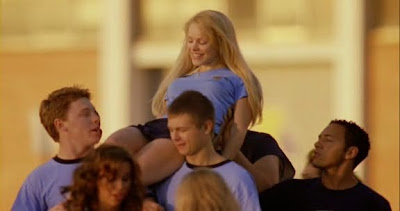 All of them seem to be honored that they get to be used as Regina's means of transportation. Like a perverse Cleopatra she relishes this moment and makes her subjects know she knows how much they love her for being her slaves.
She smiles at them filled with satisfaction (never disbelief) and we understand that her every wish is fulfilled by them.
However her glow comes with a warning, "don't be fooled cause she may seem like your typical, selfish , backstabbing slut-faced ho bag but in reality she's so much more than that."
And she is, as the plot moves forward Regina makes it clear that her reign will be over when she wants it to be over.
Later in the film we get a bookend to this first glimpse of Regina's glory. After wreaking havoc in her high school and in the process destroying her kingdom she watches the scene with the same sly smile we saw before on her face. 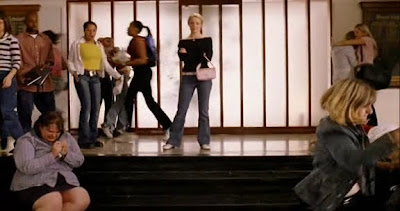 As people around her insult and hit each other she just stands there completely untouchable. It might be because the others are so concerned that they haven't even noticed she's there but we know that to Regina this actually means her subjects are still so terrified and respectful that they would never approach her like they would an ordinary being.
The camera in this shot pulls back and we see that Regina stands above some stairs like a wicked Madonna from a Renaissance tableaux.
Regina's always on top, even when she's not.

This post is part of the "Hit Me With Your Best Shot" series, hosted by the very fetch Nathaniel of The Film Experience.
Posted by Unknown at 10:22 PM

I believe this is a first. you and I both highlighted two exact shots!

"One time she punched me in the face... it was awesome."

ha! this is one of my favorite movies ever! fey's script is genius, and mcadams performance here [for me] is an instant classic. only another person gave us the meaning of "bitchy" with this class and comic relief: y'all know i'm talking bout leighton meester.

Nat: that IS weird! Kinda cool too huh? We should totally start our own Plastics!

but regina george is FLAWLESS!!!

Wow - who knew Mean Girls made such specific cinematography choices. :) It sort of amazes me, in retrospect, that Lizzy Caplan was played off as the epitome of anti-popular and funny-looking, when in reality she's kind of sickeningly beautiful. Ah, the counter-reality of teen flicks.