Of Love and Other Demons * 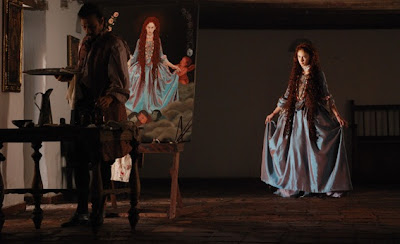 Based on the eponymous novel by Gabriel García Márquez, Of Love and Other Demons is a handsomely crafted picture that fails to stimulate anything other than the eye.
Set in Cartagena during the Viceroyalty of New Spain (although neither time nor setting are specified in the film) it tells the story of Sierva María (Triana), the young daughter of a Marquis (Climent), who after being bitten by a rabid dog is presumed to be possessed by the devil.
She is sent to a convent by orders of the Bishop (Dauder)-"we can't save her body but we can save her soul" he proclaims- where she is to be looked after by the nuns and exorcised by Cayetano (Derqui), a Jesuit priest who begins to doubt his faith after he falls in love with the girl.
Whatever might have been special about the magic realist touches in Márquez's novel, is reduced here to a series of random events that make no sense as a whole and certainly fail to engage the audience on any level.
The director is kind enough to let us know about some of the specifics, like the reason why Sierva María's copper hair is more than a meter long, but then she completely neglects strange events like the affliction that ails Sierva's mother (the underused but irrepressibly fierce de Francisco) or the events the nuns mention in chronicles as ghastly but we never know of.
Almost everything in the movie is meant to be taken for real just because it's written; the nuns are scared of Sierva, the Bishop exerts immense power over the entire colony, Sierva has demonic episodes...all this occurs because characters mention it but none of the actual repercussions are actually perceived at any time.
This affects the movie greatly when it deals with the forbidden love affair between the priest and the child (Sierva is only referred to as a child but the discrepancy between her appearance and the age she's supposed to have are quite confusing).
None of the actors evoke what can be taken as real emotion at any time. Triana is pretty but so lifeless that you really have to wonder how anyone could be intimidated, afraid or even attracted to her.
Derqui tries to brood but soon loses interest and turns Cayetano into a contradiction. He's supposed to be a smart man, versed in arts and languages but acts like a pawn at the service of a plot that doesn't know where it's going.
There is also a sense of disconnectedness between the time, setting and the multiculturalism of the accents heard onscreen, this might be hard to detect for foreign audiences but for Latin Americans should induce some head scratching.
The production is effective and some of the cinematography is gorgeous but the film never succeeds in becoming either romantic, cerebral or even entertaining.
With the richness of the central theme about faith turning into barbarism and an ethereal promise that is never fulfilled, this film like its heroine is in dire need of a soul.
Posted by Unknown at 2:56 PM

I think I read this book, or parts of it and the promise was so good and apparently the film failed to capture it, which is unfortunate.

I've tagged you in a movie meme, so get to work (or not).