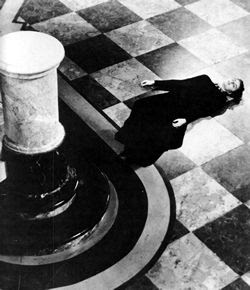 ...I couldn't help but feel elated by how brilliant Hitchcock's symbolism is and how it serves as a delicious disguise for his truly wicked subconscious.
A lot has been made about how his trademarks became as expected as his cameos, but in what I consider to be his greatest film, even after a million viewings they provide new layers and ways of reading what's going on with his characters.
For example the stairs in "Notorious" have such a key role that they could easily spoil the plot, but instead help the actors and hint at things we never saw coming.
I was struck in particular by the scene where Alexander Sebastian (Claude Rains) finds out what his wife Alicia is up to. He climbs the stairs of his home with a mixture of anger, thirst for revenge and selfpity.
Hitch however turns things upside down for him in the last, so-good-it's-worthy-of-the-whole-film, scene where he has to go down those same stairs feeling the exact same opposite as before.
This time the steps are aiding Devlin (Cary Grant) who is the film's central character and whose see-saw of a heart is the real storyline we're supposed to follow. Grant was never better than in this scene and the way Hitchcock makes those steps almost grin at us is nothing if not extraordinary.
Posted by Notas Sobre Creación Cultural e Imaginarios Sociales at 4:22 PM

from most reliable sources this is the best or 2nd best Hitchcock film, yet I can't get it at the library or from netflix?!!? absurd and sad... well except I would have to take a trip down to the mountain brook library and back again to return it since they dont route(i'm probably going to do this soon)... my existential situation response to your 'notorious' post.

Hehehe I know what you mean.
The first time saw it was on a crappy VHS, later I bought it in the Hitchcock Criterion boxset and after that went out of print I'm sure there's no single release for it, except for the one Warner recently released which has been having some sort of technical problems.
I also think that despite its prestige "Notorious" is still vastly underrated.