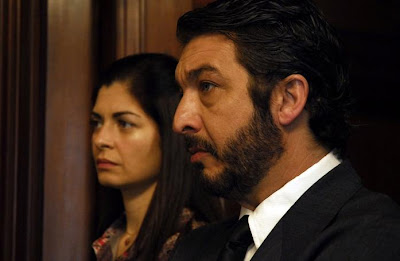 Retired court employee Benjamín Esposito (Darín) decides to spend his days writing a novel. The recurrent theme that comes to his head is the murder of Liliana Coloto(Quevedo) almost thirty years before. Through flashbacks we learn how his division reluctantly became involved in the brutal rape and assassination of Liliana.
How the empty leads affected his relationship with his new boss Irene (Villamil) and his alcoholic co-worker Sandoval (Francella).
How Liliana's husband Ricardo Morales (Rago) became obsessed with catching the murderer and tried to take justice in his own hands once authorities proved ineffective.
But above all it becomes the story of how Benjamín must learn to stop living in the past.
Executed with an affecting warmth by Campanella, the film is an exemplary combination of detective story and profound character study as Benjamín's narration through his flashbacks becomes an enigmatic, conflicting source.
Should we believe he's remembering things as they were or is his attachment to these memories affecting them to the point of romanticism?
In several scenes we see how the older Irene recognizes herself in the drafts and mocks Benjamín's tendency to over dramatize. Or perhaps she's also trying to tone down the obviousness of their unfulfilled love affair.
Despite this ambiguity Campanella makes his story so compelling that eventually we might not even realize that we don't really care if the murder is solved or not.
We care of course because the genre has spoiled us to expect such resolutions, but the real thrills of the movie are in watching the unstable Benjamín shape his own life.
Campanella who adapted the screenplay from the novel by Eduardo Sacheri, is at his best with the dialogues that most likely will suffer a great loss from their translation.
Each word from the flashbacks is delivered with enough pulpy wit and Argentinean oomph that again make us observe the nature between fact and fiction.
Since the flashbacks are set in the politically convoluted 1970s Campanella has a ball involving real life figures in the latter half's greatest twists and giving the antagonists a crude, almost operatic cruelty. They couldn't change a government that repulsed change.
"The Argentina that's coming isn't taught in Harvard" ejects a corrupt official as Irene and Benjamín try to grasp their recent encounter with a demon straight out of hell.
It helps greatly that Darín and Villamil have the quality to travel aimlessly through time (their makeup is a thing of naturalistic wonder) because we never lose the sense that we are watching the exact same people in both cases.
Darín's remarkable presence anchors the film in some of its most ludicrous turns , the final twist which had the potential for ridicule becomes worthy of a Greek tragedy as filtered through the actor's haunting eyes.
While Villamil's kind of sass establishes her as some sort of neo-femme fatale shaped out of Ava Gardner and Rosalind Russell. She bewitches us without even trying to.
The film is rounded up by a series of superb performances including Godino as a vicious, predatory force and the enchanting Francella who avoids making Sandoval a cliché and delivers one of the film's most alive speeches in a superb soccer discovery.
Most of all the film shines because of its insistence to hook us in any way it can. When the crime investigation becomes too dense, it throws us into a whirlwind of romance and humor.
All of this with the apparent intention to remind us that "in a novel you don't need to write the truth" and sending us home questioning what the truth even means.
Posted by Unknown at 12:29 PM