As a new New Yorker, I'm not sure if I'm even allowed to commemorate 9/11 like the people who lived here when the attacks occurred. This was my second 9/11 in town and to say that things feel different would be a lie, there are no mournful faces in the subway, newspaper magazines remembering the tragic date are lost between portraits of Miley Cyrus and a Kardashian sister on the tabloids and traffic never ceases; after all this is the city that never sleeps.

As someone who now lives here, and as a human being who can't help but be moved by insurmountable tragedy, I can't help but be more pensive on a date that reminds me that all of this could just end without a warning. What if someone, somewhere decided to hijack a plane, wear an explosive vest or craft a homemade bomb in his basement and I unexpectedly became a victim? These were the thoughts I, morbidly, kept trying to avoid while watching The Rugby Player, a fantastic documentary that celebrates the short life of Mark Bingham, one of the heroes of United flight 93.

Reflecting on one's mortality in the face of other people's death might be the most natural thing to do as people and watching Bingham's life onscreen constantly reminded me of that quote from The Hours in which Virginia Woolf expresses "someone has to die in order that the rest of us should value life more." This might not be much solace to the people left behind by the deceased, but on few occasions had I been so touched by the consequences of a life that at first glance seemed so un-extraordinary. 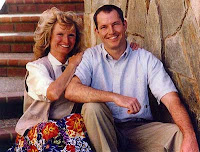 The Bingham we know through the news is the gay martyr who decided he'd rather go down with a plane than to see it destroy lives in Washington D.C., the Bingham we meet in the documentary is so much more than that: he's a man. A man who once dreamed of being rich, who starred in silly spoofs of hard rock videos with his friends, a man who at one point decided every memorable moment in his life would be recorded and saved for posterity (would he have approved of all the "found footage" movies we're subjected to yearly?), a man who chose rugby over drama club, a man who once came out to his mom because he promised himself he would do it before sunset on a random day, a man who loved a man, a man who was loved.

The Mark Bingham we meet onscreen is a man we would've liked to know in real life and that is something rare nowadays. "He's still wiser than me" says hi mom, former airplane stewardess Alice Hoagland - a woman so vibrant and warm that she's a Meryl Streep character in the making - as the documentary shows us how she took on the role of activist after her son passed away. Watching her serene demeanor as she remembers her only child breaks your heart, but watching the sense of purpose with which she works to celebrate his life is utterly inspiring. At the screening I attended tonight where she was present, she tearfully thanked her son for showing her her life's purpose and this is exactly where The Rugby Player succeeds as a film.

It reminds us that yes, life can be horrible, merciless and devastating, but it also implies a sort of mystical energy in how everything leads to where it should lead. Bingham's loss was terrible (as were the hundreds of other victims that day) but director Scott Gracheff makes a wonderful point out of connecting randomness and chaos to create beauty. Would Mark ever have guessed that one day he would be remembered in a field in Pennsylvania? Would he have imagined that one day a rugby championship - made for gay players - would carry his name? Would he ever have pictured his mother as a heroine in a cause which she confesses she only understood after her son's passing? The Rugby Player is a precious little film that transcends the limitations of sexual orientation, biographical conventions and  indiscriminate manipulation to remind us that we all have a reason to be in the world and it inspires us so that we tap into it and use it to share love, because in the end that's the only thing that remains.
Posted by Unknown at 8:07 PM


Behind Kink - Behind The Scenes Of Kink

Bingham's loss was terrible (as were the hundreds of other victims that day) but director Scott Gracheff makes a wonderful point out of connecting randomness and chaos to create beauty.
for any query or support go here