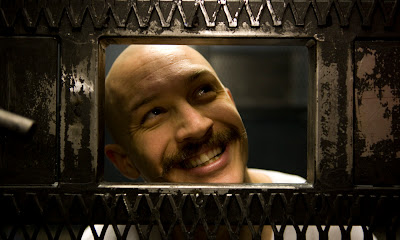 How would you feel if a movie about a sociopath didn't care in the least if we understood his behavior or not?If you would feel offended or cheated then "Bronson" is not the movie for you.
It's a perversely entertaining portrait of Britain's most violent prisoner: Michael Peterson, better known as Charles Bronson.
He took on the name of the famous action star in his bareknuckle boxing days on the advice of his agent. This also happened during one of his paroles; the man has been in prison on and off for thirty four years now and as the movie let's us know, there is no programmed date for his release.
Since redemption, at least in the terms of our society, is out of the question for Bronson, director Winding Refn approaches him not like a story to tell, but as a fascinating subject which you only watch, because you can't interpret it.
From the beginning Bronson let's us know he doesn't blame his parents for his violent nature and the movie never tries to dig deep into what might have gotten him started.
Some people perhaps never got rid of their animal instincts and their nature isn't comprehensible for the rest of us.
In that way Bronson's love for confrontations can only be compared to a wild animal and even those usually have self defense motives.
We are left then watching this man take off his clothes, grease himself up and provoke the prison guards-by kidnapping someone usually-to get into a fight with him.
Something makes him thrive violence and the results are compelling to say the least. Hardy's performance is a work of art in itself.
Considering he doesn't have a real plot to follow and the movie becomes a monologue most of the time, his performing abilities are stunning.
With his bald head, upside down mustache and imposing physique, he often recalls a cartoon villain and Hardy provides him with enough charm to make us feel guilty for rooting for a criminal.
Watching him it's impossible not to be reminded of Malcolm McDowell's iconic Alex from "A Clockwork Orange" (and the director makes no secret that he was highly influenced by Kubrick's work) but his grin makes for a slightly chillier effect because we remember he's playing someone that's actually alive out there.
He addresses the audience like the ablest of hosts and Hardy encompasses Bronson's wish of fame and stardom to such a degree that we begin to wonder if somehow deep inside Bronson hasn't already accomplished his mission by becoming so notorious?
The film's aesthetic wonders and spot on musical choices (when they play the Pet Shop Boys "It's a Sin" it's impossible not to let out a chuckle) also serve to remind us that we're living in a world where violence no longer takes much of our thoughts.
We have become so used to it that "Bronson" becomes a sort of voyeuristic guilty pleasure.
"You don't wanna be trapped inside with me sunshine" he says.
But we are and we like it.
Posted by Unknown at 12:47 AM